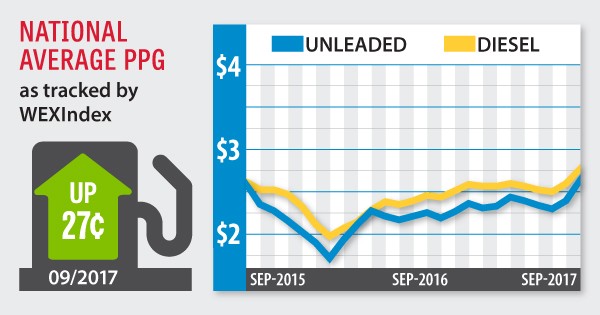 Retail gasoline prices are still in a downward trend after rallying on the back of refinery shutdowns following Hurricane Harvey.

Gasoline futures markets have dropped back to where they were before the hurricane hit the Texas coast, as the return of refineries from downtime and the seasonality of gasoline play a large role in the direction of prices as the 4th quarter gets underway.

In the immediate aftermath of Hurricane Harvey, EIA recorded the largest one-week gasoline draw on record and that has left gasoline inventories decidedly behind where they were at this time last year at almost 10 million barrels. The Gulf Coast has the largest year on year gasoline supply deficit, but as refiners return to health and demand pushes lower supplies should find a bit more normalcy.

Based on the latest EIA data, the summer driving season was relatively strong and has made up for a very soft 1st quarter from a demand standpoint. Through the first seven months (EIA has issued final demand figures for January through July) gasoline demand is relatively flat year on year. However, an OPIS survey of retail outlets throughout the country continues to see gasoline demand down and the summer driving season saw average volume drop by 2.9% when compared to 2016.

Crude oil prices have recovered during September and are looking to continue that trend with prices in the low $50 per barrel area. At one point in late September Brent crude oil was making a run at the $60 per barrel level, but has since cooled off.

Despite some builds while Gulf Coast refinery operations were slowed, crude oil inventories are trending lower, especially against the five-year average, which is one of the key metrics OPEC is using to determine if its production cuts are working.

Crude oil demand is likely to remain strong with refined product margins strong enough to incentives refiners to continue to run at high rates. But as crude oil demand remains firm, so too is U.S. production. Based on EIA data, domestic crude oil production is now more than 1 million b/d higher than it was at this time last year.

Meanwhile, exports of crude oil from the U.S. have set a record at roughly 1.5 million barrels per day. Some analysts believe that exports could make a run toward the 2 million barrels per day mark sometime this month. Increased U.S. exports are being inspired by some of the wider spreads seen recently between the WTI and Brent crude oil benchmarks.

To start the month, retail gasoline prices are at $2.551 per gal in the U.S. The current price is actually a few pennies below where they were at the start of September as the market was just starting to drop from its Hurricane Harvey highs.