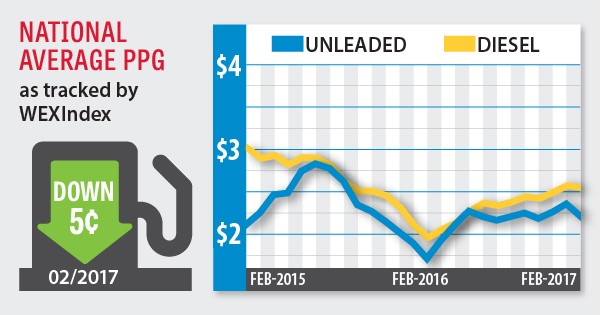 Probably the best word to describe most of the 1st quarter of 2017 is flat.

Price movements along the supply chain have been very light through the first two months keeping retail gasoline in a relatively tight range so far this year.

The remarkably flat price structure through the first two months of the year starts with crude oil as a tug-of-war of sorts keeps prices from moving too much one way or the other. The OPEC production cut has indeed taken barrels off of the market, but at the same time, it has opened the door for more U.S. crude oil production. According to government data, domestic crude oil has risen back above 9 million barrels per day for the first time since April of last year when output was in a decline in the aftermath of the massive price declines.

So far this year, WTI futures have seen prices shift between the low and mid $50’s and does not have much of an appetite to break out of that range.

Wholesale gasoline prices have shared the same price patterns with prices not breaking out significantly one way or another. That trend though should begin to change in March as markets start to kick winter grade gasoline out of the system in favor of the more expensive summer blends. An appreciable price increase may take some time, but it is expected to come by the end of the month.

Supplies that continue to hold at least a small surplus to last year’s bloated supply status remain, which could delay any upward momentum in prices, though some purging of the system could bring gasoline surpluses to a deficit relatively quickly. Gasoline demand is also a concern. 2016 was confirmed as the year with the highest gasoline demand topping the record from 2007, but 2017 is likely to see a bit of gasoline demand destruction.

March will most likely end up as a “sloppy” month for supply and demand and so far U.S. retail gasoline prices have not broken much from a 10 cents range of $2.26-2.36 per gallon and this month may not change that range.