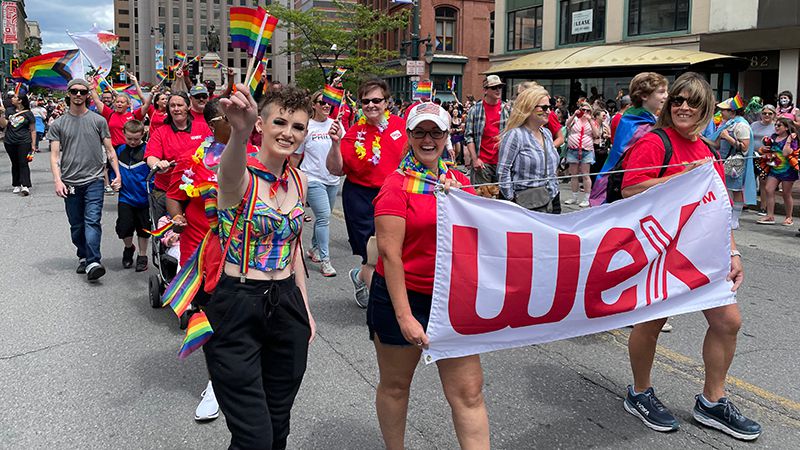 June is a month of celebration for the LGBTQ+ community across the United States. Parades, Festivals, and other events bring people together to uplift and reflect on the achievements of the LGBTQ+ community over the years. Today, WEXers marched in the parade and attended this year's festival in Portland, Maine, just down the road from our Global Headquarters and later this summer our colleagues in Fargo, North Dakota will celebrate during their local Pride events in August. Celebrations are also happening in Australia this month and will occur in the U.K. in July. 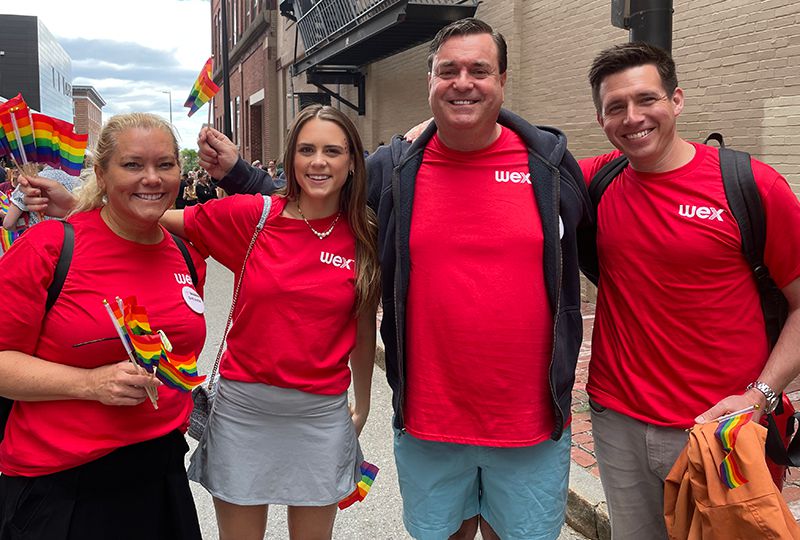 WEXers gathering today to march in the Portland Pride parade 2022

A history of Pride celebrations nationally

The first ever Pride celebration occurred on the anniversary of the Stonewall Inn uprising. The Stonewall Inn was a popular gay bar in the West Village of New York City, and in 1969, a series of events occurred between LGBTQ+ protesters and police. The inn was commonly raided by the police and this was not the first time there was an interaction between patrons of the bar and police. Before 1980, homosexuality was a criminal offense in New York City. Stonewall became famous because of the media attention it received, as it was a culmination of events that had occurred over many years. The event marked a transition in the conversation surrounding LGBTQ+ activism in the United States.

How Pride is celebrated in towns across the U.S. 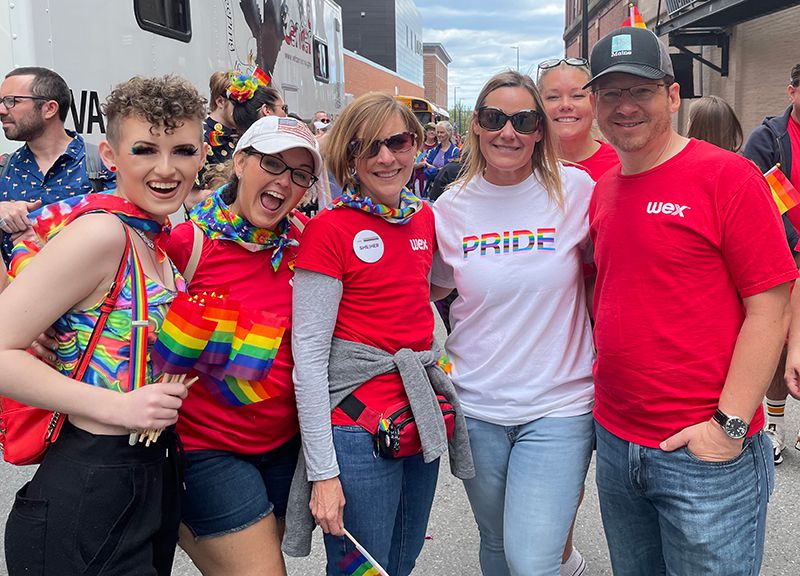 WEXers gathering for the march

Pride Portland!, formerly part of EqualityMaine, has put on its traditional parade and festival today after a two-year hiatus. Every year this event celebrates and honors the accomplishments of the LGBTQ+ movement, raises awareness of the community’s ongoing struggles, and fosters an environment of inclusivity, accessibility, and support.

WEX has been a proud sponsor of EqualityMaine and Pride Portland! for years. WEX’s funding and support directly help sustain EqualityMaine’s programming which benefits the LGBTQIA+ community in Maine. This includes their education programs, youth summer camp, and various other resources. It is important to WEX to support communities and organizations where social equality is a priority and has aligned itself accordingly. Diversity and inclusivity are at the heart of WEX. What helps ensure this focus on DE&I at WEX is employee resource groups (ERGs), providing a place for employees to come together over shared interests. The ERG, WEX Pride, offers an open and safe community within the company to connect on deeper levels. 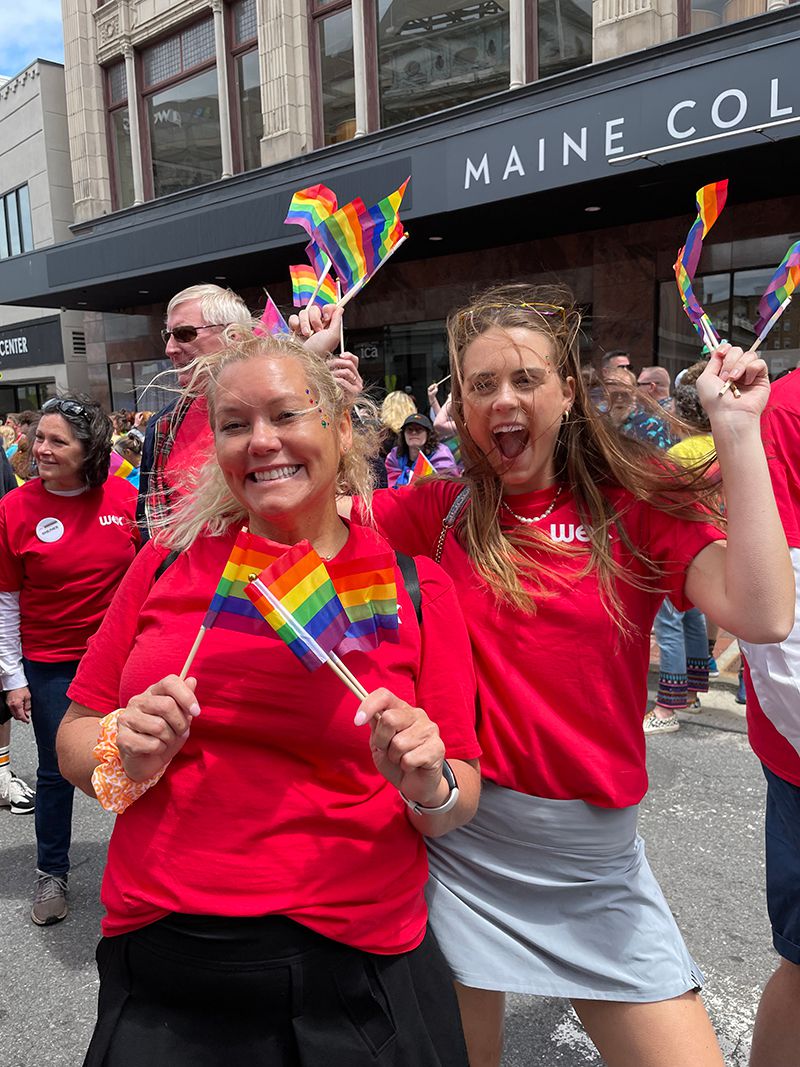 The Pride Parade is always a fun event. My family and I have marched in the parade for many years and my kids were thrilled that we were going to be able to participate with WEX and the Pride ERG again this year. We enjoy being able to be there and support the LGBTQ+ community. It is also impressive to see both large and small Maine-based businesses marching together.

I was happy today to see so many colleagues come out to march together including Kim Sorensen, coming up on her 29th year at WEX, who shared this with us, "Hats off to WEX for supporting all their employees. It's so important that we show the rest of the world how it's done. We're a community. We're part of this community and we support each other. We're so fortunate to have a company that supports us - that we can be out at work and be okay with it. Everyone knows who we are. That's really important. To know who you are and to be safe and to be okay. And we want to show our kids coming up." 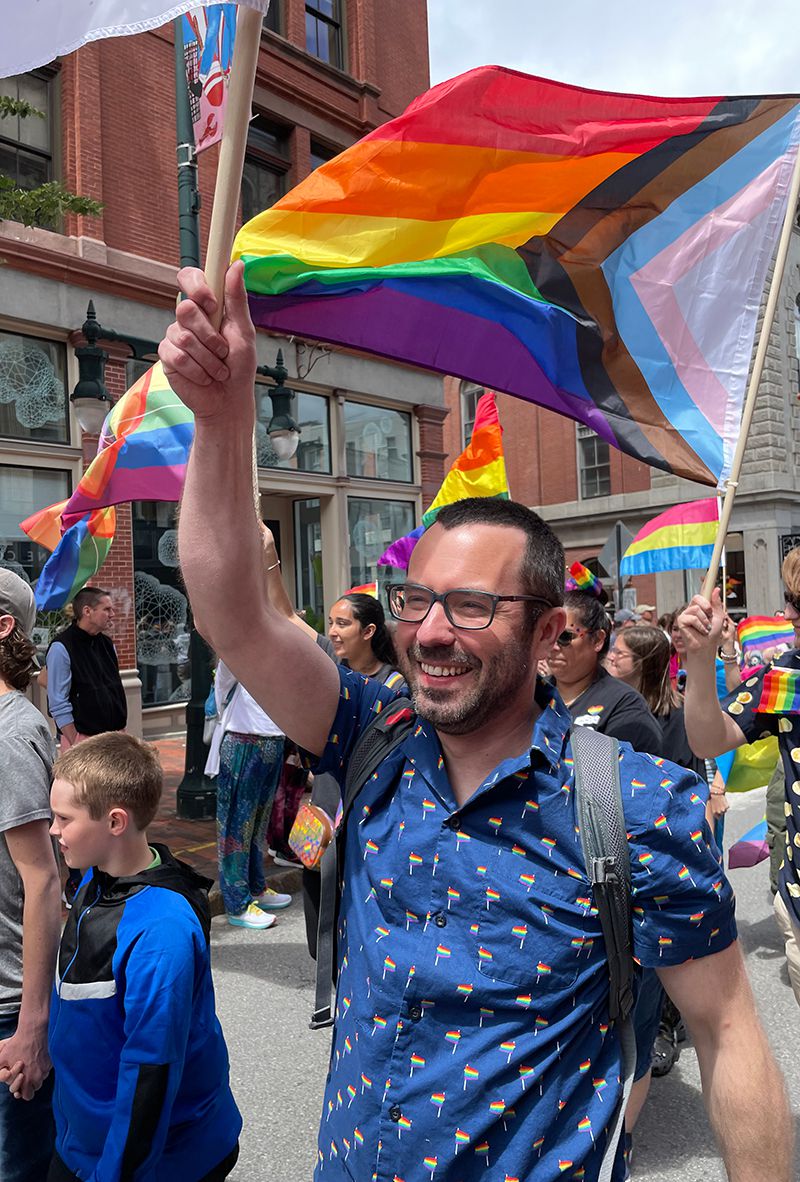 Tim Boyden, who's been at WEX for 11 years, was also at the parade marching with WEX today and he shared this: "What Pride means to me is a sense of inclusion and diversity."

The WEX Pride ERG was founded in the Winter of 2019, which ended up being challenging timing to try to kick off a new organization: the COVID pandemic sent everyone remote in March of that following spring. When the company moved to remote work, the ERG was challenged to be able to support our group and transition to virtual programming. It was hard to find a way to get people in and engaged during the peak of the pandemic, however, we were able to adapt and leverage our virtual programming to expand our reach to colleagues across the U.S. and WEX’s global footprint. As the world is slowly returning to normalcy post-COVID, we are ramping up. 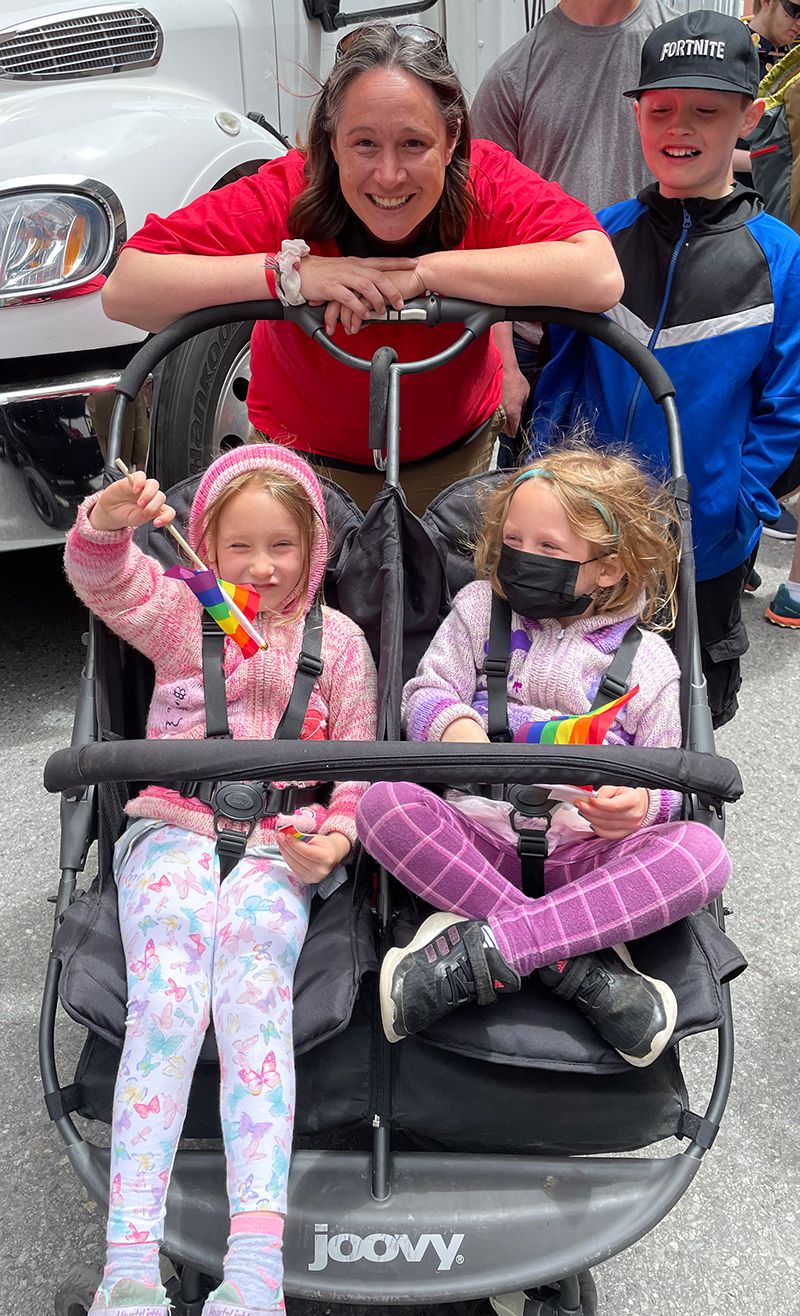 ERGs have been an avenue of connection during the pandemic. Remote working is hard, let alone trying to connect with people virtually. These small groups have created a sense of community through virtual meetings and events.  I’ve personally made many new friendships through my involvement in ERGs, from all different parts of our organization and from different parts of the world. These are people I never would have come across otherwise because our paths just do not cross in our day-to-day work.  WEX is huge, it’s so much bigger than when I started, and now we are global. Through our participation in WEX Pride, talking to people in different parts of the country, or even the world, unites us passionately over topics that are important to us.

Employee resource groups and the power of allies

I am particularly passionate about the WEX Pride ERG - it holds a special place in my heart. I originally joined the group to learn as much as I could about the LGBTQ+ community as an ally. I have a family member who is gay and I wanted to be able to support him as much as I could. Now, I stay involved because I want to be able to support anyone here at WEX who represents the LGBTQ+ community, and show my colleagues that there is a safe space to go and someone to talk to, always. We are a group that accepts everybody. I think that it is critical to have these communities within WEX for employees to gather - ERGs highlight all the diversity we have within the company. 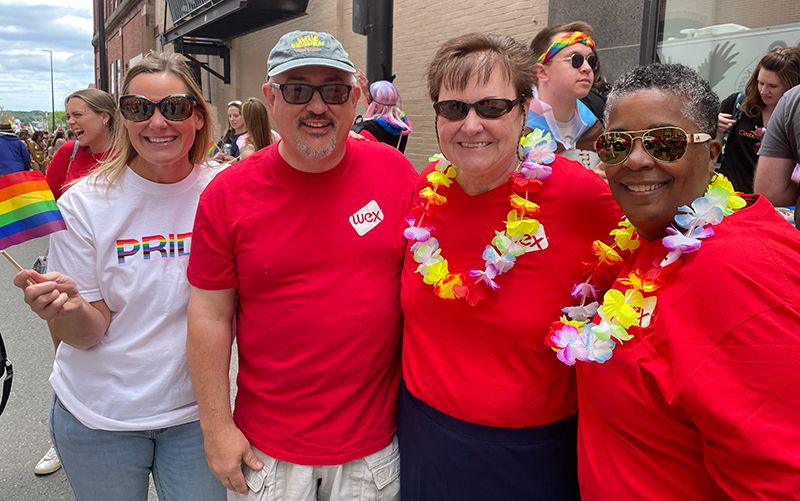 A few months ago, WEX Pride organized a presentation about the use of pronouns. WEX then took the step of making changes to include pronouns in our administrative tools, and encouraging employees to add a preferred pronoun to their email signatures. 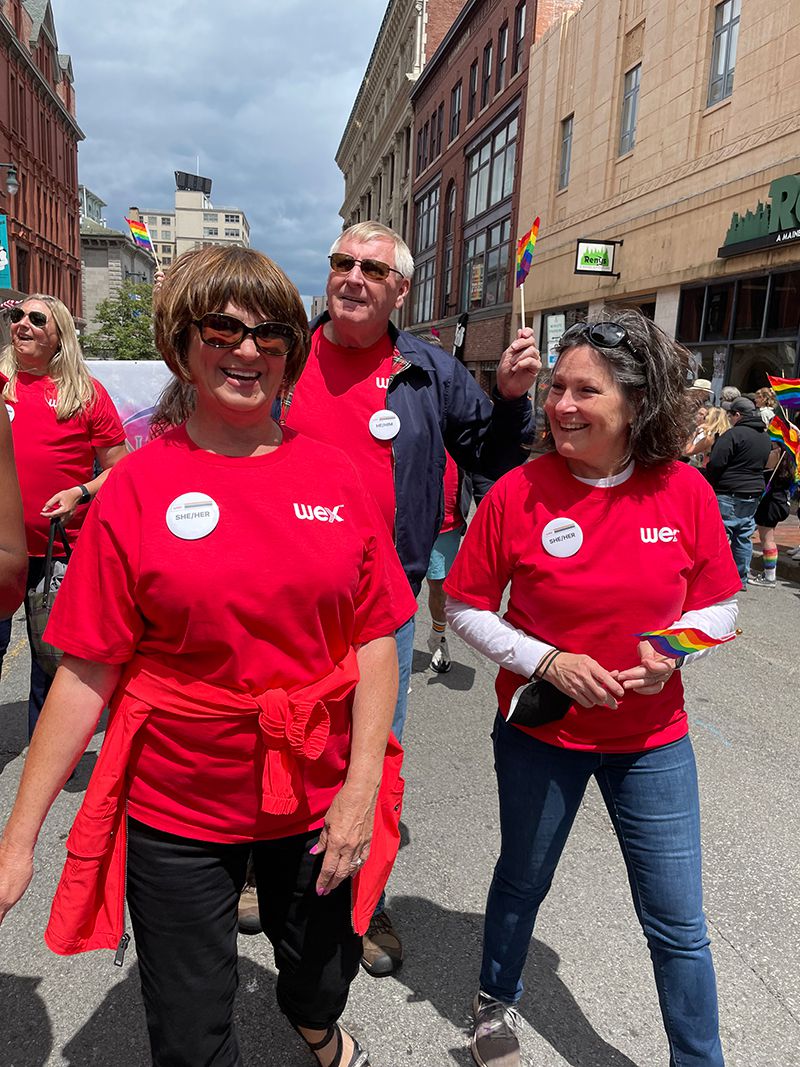 WEX Pride is looking forward to hosting a series of events throughout the summer to keep the ERG moving forward, and to continue to celebrate who we are and what we have to be proud of. WEX’s support for our Pride group is really meaningful to all of our members, and makes us grateful to work for such an inclusive and thoughtful company.

If you’re interested in working for a growing and global organization that values inclusion, please visit WEX’s career page.

Lauren has worked at WEX for 15 years and is currently a Team Leader for Corporate Payments and North American Fleet Agents. She is the Programming Chair for the WEX Pride ERG and has been since its founding in November 2019. She lives in Maine with her family and assortment of various pets and has a serious coffee addiction.

Lauren is a proud Texan and received her Bachelor's degree from The University of Texas Health Science Center at San Antonio.