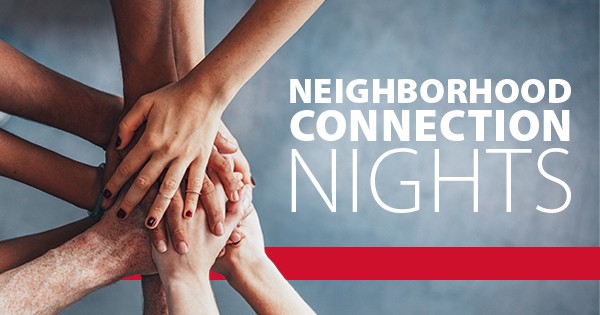 The simple act of gathering together to share a meal can be a powerful force for positive change in people’s lives and their community. That’s the spirit behind Neighborhood Connection Nights, a monthly program held in a neighborhood near our South Portland headquarters. The dinners are a collaborative effort, and illustrate just how impactful this seemingly simple concept can be.

The genesis for the program was a connection between our philanthropy team and The Opportunity Alliance (TOA), an organization that works with people to build better lives and stronger communities. The organization was developing a new initiative around community building, and the idea of monthly dinners to support the concept was part of our conversation. WEX volunteers already had experience with preparing and hosting meals for a local food pantry, so we got on board, initially hosting small monthly dinners at a TOA facility.

“In 2011, we moved the dinners to the Red Bank community near our offices, and I’ll never forget the first dinner,” said Frank Douglass, WEX director of treasury, who helped launch the program. “There were a lot of kids there, and they were hungry – some of them came back for seconds, thirds and fourths. It was both wonderful to see them served and also heartbreaking to see that there’s that much basic hunger in our community.”

Participation and momentum for the gatherings grew, and it became clear that the WEX volunteers who were preparing the meals in the sparse kitchen facilities of the Red Bank gym needed help. So in 2013 we partnered with Southern Maine Community College (SMCC) to create a scholarship for their culinary arts program. Beyond preparing the monthly meals, the scholarship supports menu planning, ordering, budgeting, and leadership skills. Scholarship recipients have included students living in the Red Bank community.

Today, 90-150 people are welcomed at each dinner with participation often depending on weather or what’s happening that evening. In addition to the meal, each gathering has invited speakers and a table with information about local resources available to participants. Community residents also use the monthly gatherings as a way to welcome newcomers and share special moments and milestones. Some of the participants have formed their own organization, which has presented to the city council on issues important to the residents. The council was so impressed that some members now attend the monthly dinners.

“I’ve been volunteering at the dinners for over two years now, and it’s such a joy to serve the community, to see the kids growing up and to come to know our neighbors,” says Jana Ratz, a WEXer who currently manages our volunteers for the dinners. “This winning program is a lot of fun and is definitely a team effort, with SMCC preparing amazing meals and WEXers there to serve and participate in special activities like holiday cookie decorating and Santa visits.”

The impact of the program goes beyond addressing hunger. According to The Opportunity Alliance, in the last five years the neighborhood has seen a huge reduction in state interventions for child abuse and neglect, which is a long-term indicator of risk factors like substance abuse disorder, homelessness and food insecurity. Based on the success of this pilot, TOA is now taking Neighborhood Connection Nights to eight other neighborhoods with the model that WEX partnered to develop.

“The change in this neighborhood has been absolutely wonderful and is a great example of what can happen when a business like WEX takes ownership of its community,” said Chris Gorman, director of the program at The Opportunity Alliance. “It’s been unbelievably powerful to have WEX as a partner – the lives of neighbors here have benefitted, and now that will be spread to eight other communities. Because we have this ideal model, we can now make five years worth of progress in one year in these new locations.”

If you’re interested in learning more about our commitment to the communities where we live and work, take a look at our Social Responsibility Report.