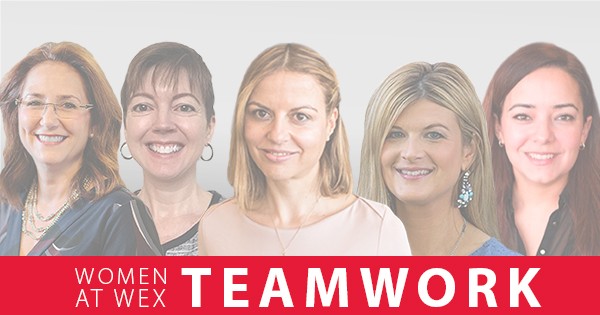 At WEX, we value the importance of teamwork – and that is a common theme among female WEXers who have shared their stories and achievements on The Glass Hammer. Building and working closely with great teams is often a crucial element of these women’s careers and milestone accomplishments. For WEX Senior VP and General Counsel Hilary Rapkin, working with a team to file our 2005 IPO in three months remains the professional achievement that makes her most proud.

Rapkin recalls, “By knowing your relative strengths and weaknesses, you start realizing that it’s the sum of the parts that makes companies successful, and you don’t have to have the weight of the world on your shoulders.”

According to Tiffany Wirth, our VP of healthcare marketing, building the WEX Health brand and marketing team from the ground up has been her most noteworthy achievement. Her career has been based on a philosophy that defines success by your own personality and the opportunities you create for your team and yourself, rather than solely by the company where you work.

Wirth was part of a core team that created the healthcare benefits technology platform organization that was ultimately acquired by us to become WEX Health. “I’ve built my team by focusing on each person’s unique skill set and how collectively we can deliver tremendous results and a positive ROI to WEX Health and our partners,” she says of her approach to team building.

Surrounding herself with good people is a key ingredient in her recipe for success says Michelle Pokrzywinski, our VP of IT. In fact, one of the most noteworthy moments in her career was the quick creation of a team from disparate areas of the company that cohesively and successfully tackled a large software development project.

“When you have the right team, it has a ripple effect as they all come together,” she says. “You’ll gain collaboration, efficiency and unlimited success when you do the right thing by your team members by putting them in roles where they can succeed.”

At WEX Europe, Market Development Lead Noelia Torres considers teamwork goal number one. Throughout her career, she’s learned that the most relevant asset a company has, no matter the size, is their team. “I learned early on and have taken this lesson with me that if you want to achieve a goal, it’s all about the team that surrounds you,” she says. Like other WEX women, Torres has found her ability to build teams as the professional achievement she’s most proud of so far.

Before joining WEX just over one year ago, VP Finance, Corporate Payments, Irina Hossu managed the integration of teams following an acquisition. That experience turned out to be one of her greatest professional achievements that also helped her understand the value of hiring people with different skills from her and empowering them to get the job done. She notes that the best ideas come from the collaboration found in a smart, cohesive team.