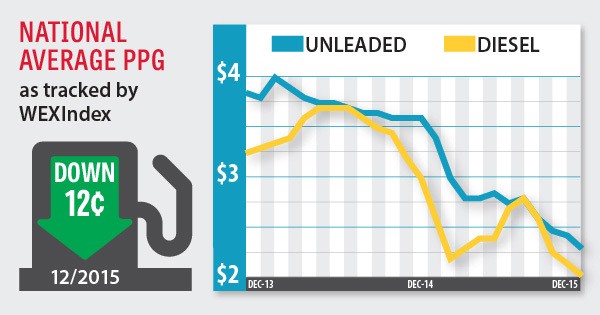 The national average has now cracked $1.99 per gallon, and if you exempt high priced California, Americans are barely paying $1.90 gallon on average in the 49 other states. But surprisingly, gasoline is actually fetching a fairly high price, relative to the price of crude oil. Wholesale gasoline prices are in many cases $12-$30 bbl above crude costs, and that is a strange phenomenon for early January.

Despite saber rattling and increased tensions between Iran and Saudi Arabia, there is no indication of any forthcoming change in crude oil balances. In fact, OPIS expects that crude oil storage levels will break fuel index records throughout January.

Demand for both products is expected to be subdued in January. The month traditionally provides the most challenging demand period for gasoline, and year-over-year price comparisons are narrowing. January 2015 saw a steady gas price slide with average numbers ending the month at $2.02 per gallon. Accordingly, the edge versus last month is not likely to be in the 40-60 cents per gallon neighborhood witnessed in some autumn months.

The next major shift for all refined products’ prices may come in late January and February when the first heavy round of refining maintenance begins. The cuts in refinery runs may help tighten gasoline availability, but it could put even more downward pressure on crude values.