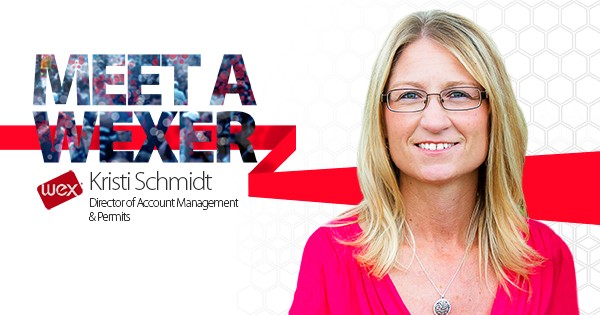 By her own admission, Kristi Schmidt wears a lot of hats as director of account management and permits for WEX Payables. Located in our Chanhassen, Minn. office, she’s built a 19-year career in the fleet payments industry, officially joining WEX last year when we acquired EFS. A look at her career path shows why wearing many hats suits Kristi just fine.

Kristi began her career as an IT project manager, having studied database marketing and general office management. She soon made a move to PTS, a logistics company for LTL (less than load) trucking fleets that moves goods from many customers on a single truck. There she worked closely with sales and customers to identify opportunities to streamline various functions. Shortly after Kristi joined PTS, the company was acquired and she became part of corporate logistics and the biz technology group at CH Robinson – a position she held for seven years.

By 2006, Kristi was ready to don another hat when she decided to leave the corporate office to work at the T-Chek branch as operations manager for merchant services. This move expanded her repertoire of skills to include oversight of issue resolution, as well as relationship and business development around merchants and their customers. Just a year into that position, she was asked to also manage the team that issues permits on behalf of customers.

Change was in the air again when T-Chek was sold to EFS in 2012. While Kristi’s role remained relatively unchanged, she was promoted to director of merchant services and permits in 2014 in recognition of her scope of work and accomplishments. In less than a year, she was given responsibility for the corporate payments operations team, a move that would be a departure from her fleet experience and bring her into an entirely different realm working with a newly formed team of account managers.

“The EFS corporate payments capabilities were one of the reasons WEX was interested in acquiring the company,” observes Kristi. “EFS is its own issuer and processor of a MasterCard product that customers can use for travel, purchases, expenses and more while earning valuable cash rebates they wouldn’t receive if they used check, ACH or wire payments.”

Making the Move to WEX

Last year, EFS was acquired by WEX, where as director of account management and permits, Kristi now oversees the corporate payments team, permits team and a client services team. The client services team supports customers who have us make payments on their behalf for invoices above $750. For this team, the top priority is ensuring payments coming into the queue get paid on time.

For Kristi’s corporate payments team, at least half of their time is spent on customer support and questions around reporting, card maintenance, rebates, billing, systems and a variety of other topics. In order to truly own that customer relationship, her team interfaces with colleagues from accounting, WEX Bank, implementation and sales in order to answer customer questions. The priority at the heart of all this activity is to build strong relationships that lead to customer retention and growth.

On a day-to-day basis, Kristi works alongside her teammates to help build those strong relationships, often focusing her support on questions around fraud, new technology and customer enhancements. She’s big on documentation, and notes that as new systems and enhancements are implemented, she’ll get involved from an operational standpoint creating documentation. Her role also finds her working with other areas of the company, including accounting, IT and legal, to make sure everything is set from an operational standpoint.

“The part I love most about my job is people – working with our customers and my team,” says Kristi. “I have 28 people between all of my teams, and I want to make sure they know I’m here to support and guide them. I want to learn about where they want their careers to go so I can make sure they have the opportunities they need. That way, when an advancement comes up, they’re ready to be considered for those positions.”