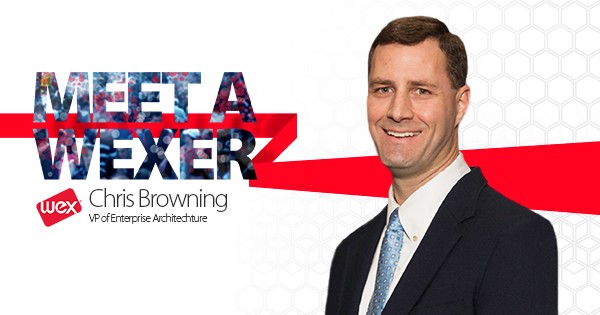 Chris Browning is a newly-minted WEXer, having joined the company as director of software engineering for the corporate payments team this past October after our acquisition of assets from payments provider 3Delta Systems. Chris leads a team of software developers, infrastructure developers and QA professionals who have designed, built and maintained applications that will bring added depth and vertical integration to our corporate payments products and services.

“Coming from a smaller company, I’m really looking forward to being able to do more because we’ll have the resources of WEX to bring to bear when solving complex problems for our customers,” said Chris. “I’m also excited that WEX culture is so empowering and allows leaders to manage and empower their teams to do great work, as this aligns perfectly with the agile approach we take to development.”

Shortly following the acquisition, Chris was named interim VP of enterprise architecture, a new role for the company. “Chris will be blazing the future for the technology organization, defining, evangelizing and prototyping our next-generation architectures and technologies,” said WEX CTO Dave Cooper. “He will work closely with key stakeholders, including leadership and subject matter experts, to map a holistic view of the organization’s enterprise strategy, processes and information technology assets.”

The Road to WEX

From the onset of his career, Chris was drawn to software development in the financial services sector – a focus that has only strengthened over the years. After graduating with a degree in computer science from Auburn University, he spent two years at American Express as a developer of business travel-oriented software. He then hopscotched around the country, working in Houston, Orlando, Atlanta and eventually landing in Pensacola working as a software consultant.

Chris’s trajectory to his current role at WEX truly began in 1999, when a former colleague reached out to him in Atlanta to help create an online credit card processing gateway for a new startup that became 3Delta Systems. For the next seven years, Chris worked nonstop as a consultant to write code for the back end that handled the entire credit card authorization process, along with other aspects of building the software. By 2006, he officially joined the company, initially as VP of software engineering, then transitioning to become CTO a few years ago.

Today, Chris and most of his technology team are located in Gulf Breeze, Florida, with a few members working from offices in Kentucky, Georgia, Virginia and Maine. His team is responsible for building, enhancing and maintaining applications for the software platforms of two major product offerings. The infrastructure that supports the platforms, along with QA activities, are also handled by his team – allowing them to work on both sides of the development effort.

Chris’s software team works closely with the product development group to identify and implement product solutions based on features that matter most to their stakeholders. Chris notes that the product team oversees priorities and the product roadmap, working with him and his team to create and manage a backlog of items they then tackle using agile software development. Working in two-week development cycles, innovation is a focus, the pace is fast and collaboration is the key to successful outcomes.

“Our team culture is focused around a collaborative relationship with product, which we like a lot as it allows us to align and make sure we’re all on the same page and working to accomplish the same goals,” observes Chris. “It’s been nice joining WEX and seeing that same level of collaboration in the way the product and technology teams interact in the corporate payments group.”

Teamwork is central to everything the development team does, and Chris notes there are no silos and no one works on anything alone. The approach is to come up with common goals, and then define and implement them together. His team, which is comprised of fairly senior software developers, is very hands-on. In addition to writing code for the apps, the team is coding up the entire platform infrastructure. And while solid programming skills are a must, Chris believes that communication is probably the most important skill for people working in this environment.

A Focus on the Future

While supporting his team to accomplish the day-to-day demands of their jobs, Chris also has his sights set on the future – especially in his new role as interim VP of enterprise architecture for the entire organization. He says that the most rewarding aspect of his career has been the challenge of tracking rapid technology changes and figuring out which will be most beneficial for the business. He notes that since you can’t be an expert in everything, he works to choose carefully where he focuses his time and energy building expertise that he can then share with his team. Likewise, Chris also looks to his team for their expertise, creating a dynamic where innovation can be shared and managed into solutions the team can then build.

“It’s definitely been a whirlwind since joining WEX, and I have been over-the-moon happy with everyone I’ve met on the corporate payments team, as well as folks from product and enterprise services,” says Chris. “I’m looking forward to the year ahead and working with my team and leadership to make the most of all the new opportunities that are available now that we’re part of WEX.”