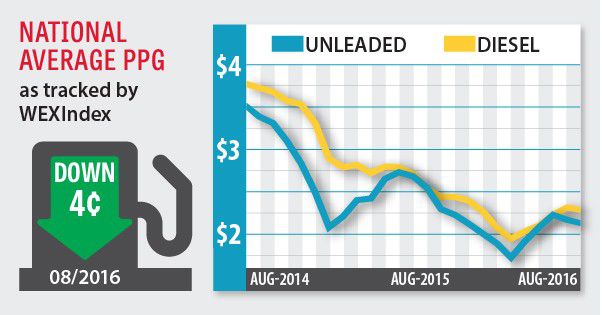 September started with the lowest Labor Day retail fuel prices since 2004, and with the summer driving season in the rearview mirror, prices are more than likely heading lower.

The market did get its first taste of tropical activity in late August/early September when Hurricane Hermine moved through Florida before making its way up the east coast. Although there was no impact on oil and gasoline infrastructure from Hermine, the storm is a reminder that the demand destruction potential is the greater threat when no refineries are threatened.

Besides the decline in demand that traditionally happens when school starts and the weather cools, the changes to the fuel spec as mandated by the U.S. Environmental Protection Agency are also coming this month leaving refiners with gasoline specifications that give them a bit more wiggle room and the opportunity to add cheaper components to the gasoline equation.

Gasoline inventories are beginning September at some of the highest levels ever as well. Healthy gasoline supplies in the U.S. are expected to make up for some lost production as fall refinery maintenance starts to pick up.

As much as September has not been a month that is kind to gasoline prices, the same can be said for crude oil. Oil traders have been mostly following headlines buying on any hint that OPEC and non-OPEC producers may agree to freeze production. Hopes of any production cooperation are quickly dashed after the realization that producers would largely be freezing output at record levels and global inventories continue to remain bloated.

Recently analysts at Citi noted that oil benchmarks have dropped in eight of the last ten years and the way this September has started, the trend appears to be heading down a similar path.

Currently, U.S. retail gasoline prices are averaging $2.199 per gallon and there are four states that see an average below $2 per gallon (Alabama, Mississippi, New Jersey and South Carolina). By the end of the month those four states are likely to be joined by several more.