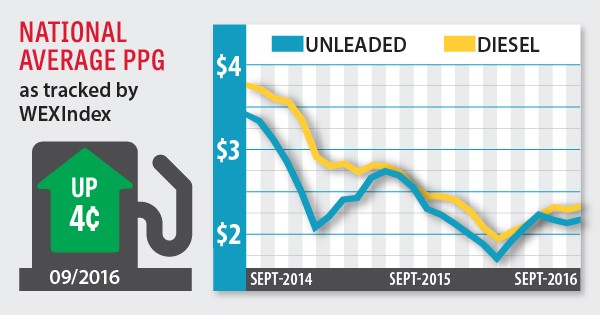 The start of the fourth quarter has seen retail gasoline prices in the U.S. rise marginally with October prices starting in the $2.22 per gallon area.

The stronger start for gasoline prices has a lot to do with crude oil prices that are at some of the highest levels seen since late June and early July with WTI closing in on $50 per barrel. Currently, Brent crude oil futures (considered the world benchmark) is already trading near the $51 per barrel level.

Some of the recent strength in crude oil is tied to OPEC headlines as the cartel met in late September informally in Algiers and agreed to an output cut to the 32.5-33 million b/d area. The deal will be ratified at the group’s formal meeting at the end of November and more details about individual production levels will be released.

For the time being the market is treating the OPEC news as bullish and pushing markets higher, but this appears to be a “Honeymoon Period” as the announcement was said to exceed expectations. Many analysts believe the challenge now lies in the execution of the agreement.

Gasoline inventories remain somewhat bouncy in that there has been no consistent down trend or upward trend in supplies. The worst of the Colonial Pipeline shutdown in mid-September seems to be behind locations in the Southeast, but supplies are still considered somewhat tight. Overall though, gasoline supplies throughout the U.S. are considered comfortable and enter October several million barrels ahead of where they were a year ago.

To start the month, gasoline prices are biased higher due to the stronger crude oil prices as well as the downtime of the Colonial Pipeline having a lasting effect on Southeastern states. Currently there are just three states that see an average below $2 per gallon, Missouri, New Jersey and Texas. New Jersey is soon expected to go from one of the cheapest states for retail gasoline to one of the more expensive as a blueprint is in place to raise state gasoline taxes there by 23 cents per gallon.