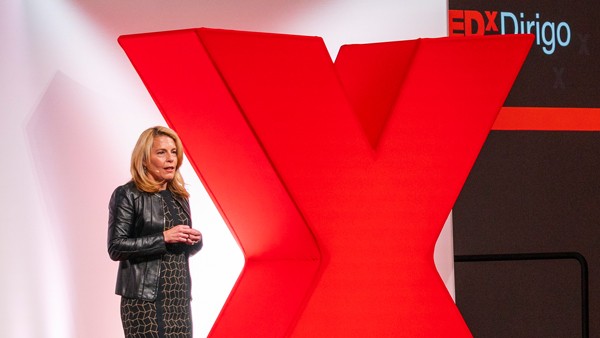 On November 2, 2019, TEDxDirigo celebrated its tenth anniversary with its annual conference at Innovation Hall at the University of New England in Portland, Maine. More than 700 people registered for the conference which featured 12 amazing speakers and 3 powerful performers. In the TED tradition, the conference showcases innovative and creative ideas from Maine worth sharing. WEX has been a proud sponsor of TEDxDirigo for the last three years, and last year, our own Nicola Morris took the stage to demystify blockchain.

This year, our Chair and CEO Melissa Smith delivered a talk titled Pick Many Lanes in Life. Smith covered the course of her life growing up on a farm in Maine and her career as a woman in finance, as WEX’s CFO, and now as chair and CEO. She touched on her first pregnancy, followed by the birth of her twins and the struggles that many successful women face in the workplace. Among one of the most valuable takeaways were her parting words to attendees:

“People will judge you. At the same time, you and only you are the keeper of your narrative. So pick multiple lanes in life, take chances, and live how you want to live—only you can decide what’s right for your own life.”

Other speakers included a 13-year-old scientist, Anna Siegel, speaking about climate change and a high school senior, Gracia Bareti, addressing diversity in our public school curriculums. The day wound down with a powerful talk from Maulian Dana, the ambassador for the Penobscot Nation, speaking about Indigenous Peoples’ Day and Native American mascots. All of these talks brought the crowd to its feet. It was an incredible day, and we were proud to be a part of it.

Smith with Anna Siegel, a 13-year-old climate activist who attends the Friends School of Portland.