Dogs in trucks: Who's riding shotgun? Meet Shadow and Trixie.

Dogs in trucks: Who's riding shotgun? Meet Shadow and Trixie. 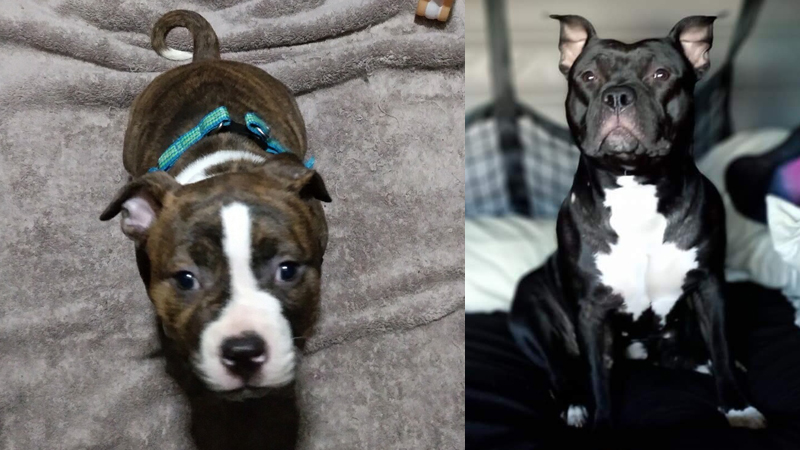 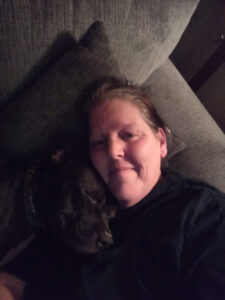 Jenni Shukhratbekov of Dart Transit Company describes her first encounter with Wendy: “I met Wendy in October of 2021 when she participated in the Special Olympics of Minnesota truck convoy. She is one of our wonderful female drivers and travels with her very cute/sweet Pitbulls on the road with her.”

Wendy’s travel schedule typically puts her out on the road for two weeks and then home for two-day breaks in between. She’s considered an OTR (over the road) driver for Dart Transit Company, which sends her traveling across 31 states.

Getting into the field of truck driving 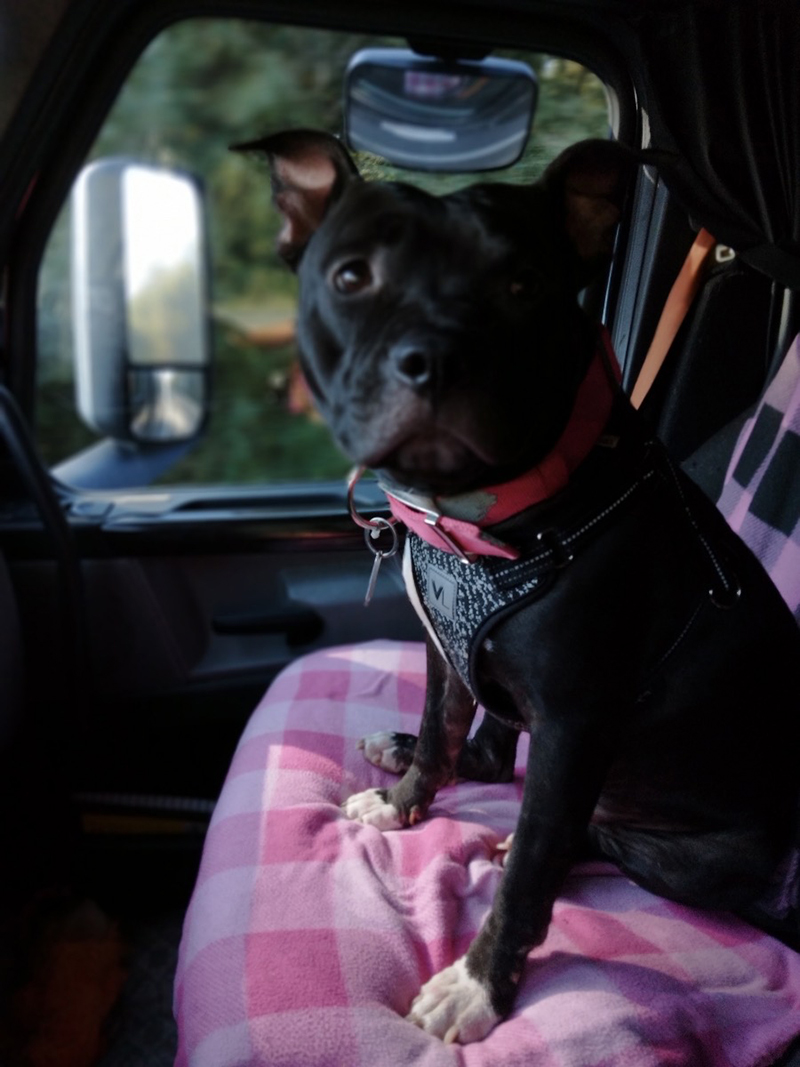 Oftentimes the life of a truck driver is passed down through the generations, and Wendy Turner is an example of that: she learned about the profession at an early age watching her stepfather heading out on the road. As an adult, she has also had friends who were drivers and had the chance to go out on an OTR trip. From there, she has been hooked and a driver ever since.

The appealing aspects of driving trucks for a living

Like many drivers we’ve talked to, Wendy loves the life of a truck driver. “It’s peaceful. I love seeing new things, being out on the road, and I love always having access to different scenery.” When Wendy’s on the road, she most enjoys the more mountainous regions of the U.S., and when she’s driving, she likes to chat with friends on the phone to help pass the time. She also loves to listen to country music -- especially Brett Young, George Strait, Alabama, George Jones –generally older, more traditional country music.

One of Wendy’s favorite spots is the Iowa 80, which has a claim to fame as the largest truck stop in the world. “Iowa 80 is off of interstate 80 in Wolcott, Iowa. It’s a really beautiful place to visit with a vintage truck museum where they’ve got old-timey trucks hanging from the ceiling.”

Wendy also loves the ability to leave the stressors of home behind, and describes her work as having a calming effect on her life. Family and friends tend to lean on Wendy for advice and guidance, but when she takes off for a two-week trip, they have to give her space. She embraces the opportunity to separate herself from everyone who depends on her back home, and she welcomes the chance to exert some independence when she’s traveling. 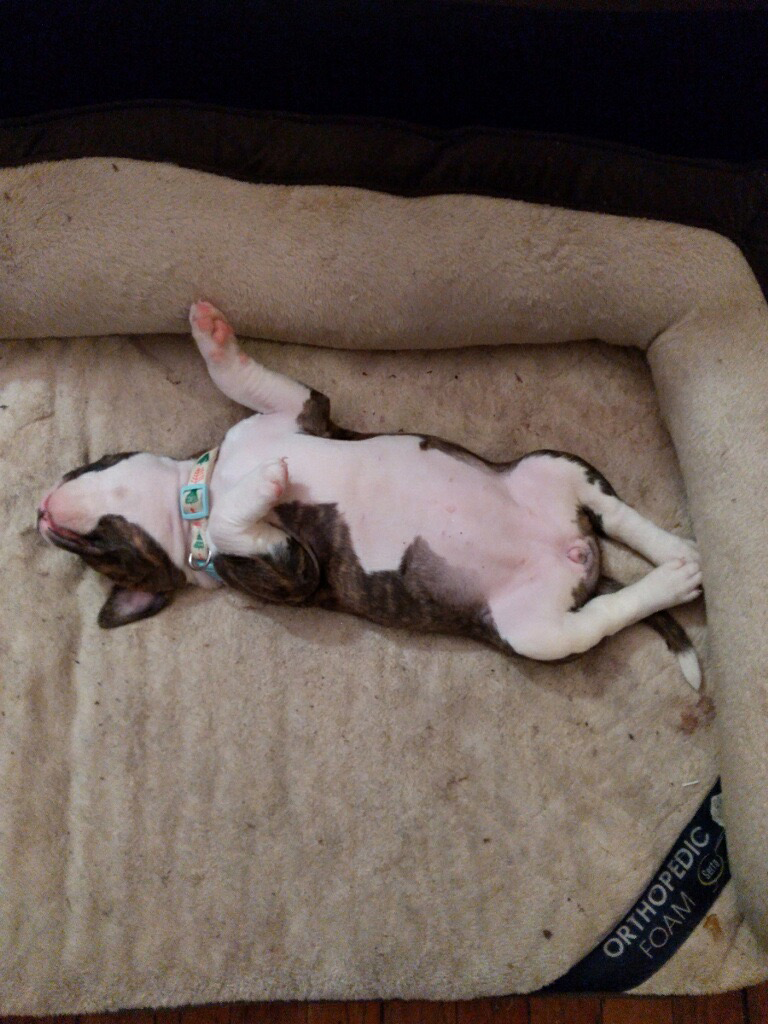 Trixie in one of her favorite sleeping positions

Wendy has been driving for Dart since September of 2020, and prior to that, she drove for Swift for three years. Her home-base is Winston-Salem, North Carolina where she grew up. What Wendy loves about driving for Dart is the culture at the company. “Respect. Family values. If you have a family issue they support you and make sure you get home-based. They care about their drivers.”

Having dogs in the truck brings home on the road

The thing Wendy likes most about having her dogs on the road with her is the companionship. Shadow and Trixie are great company as she travels the country. “You can do activities with them on a trip, there are a lot of toys in my truck. They’re good company.”

On the road, Shadow usually spends time in the sleeper. Trixie lays in between the seats or on the floor and she’s got a quilt for comfort, too. The mother and daughter have a maternal bond and are good friends.

Wendy mostly keeps to herself when she’s on the road, and has her dogs as her companions, except when she participates in convoys with other drivers.

Truck convoys can be a fun community-building event for drivers 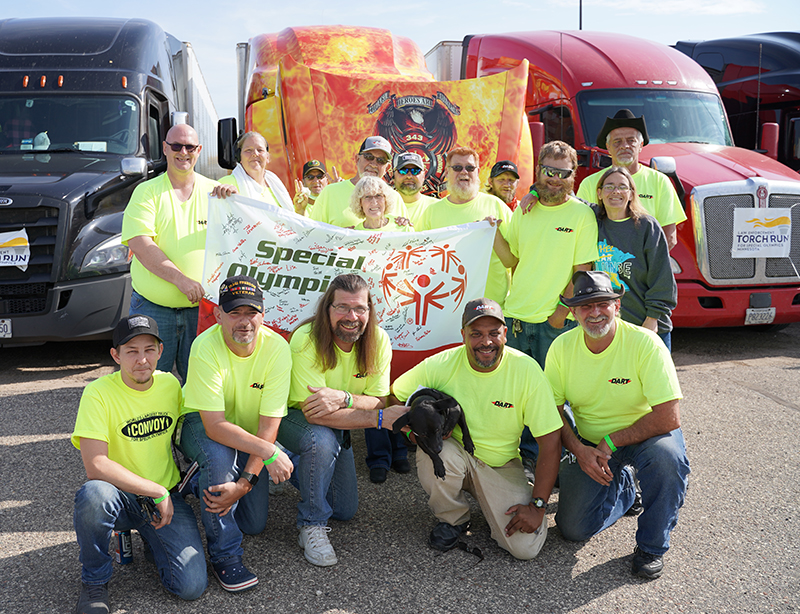 The Wall Street Journal describes a convoy as “A group of vehicles traveling together for mutual support, protection or convenience. Truckers' convoys, which have been part of truck driving culture since the 1970s, typically involve multiple big rigs lined up on the highway and moving in the same direction.”

Wendy has enjoyed being a part of convoys since she became a truck driver. The one she holds near and dear to her heart is the convoy that Dart sponsors for the Special Olympics of Minnesota. This 17th annual event is a two-day celebration held in October at Running Races in Columbus, Minnesota, which helped raise money for Special Olympics Minnesota. “I met a lot of very special, kind-hearted people, and it was nice because we were all together for the event.  We were each able to take one of the Special Olympic children on a ride with us. They love it because they can get in the truck and all of us follow each other for a mile or two and then we come back together back where we started. The kids love the experience.” Dart has been a proud partner of the Special Olympics Convoy for more than 15 years.

Shukhratbekov describes how the Olympians and drivers teamed up to drive in the convoy together last October: “Many of the Olympians were excited to get in the passenger seat and get to know the drivers. With the help of local police, drivers and Olympians made a 1 hour loop north then back to Running Aces. Our drivers take their own time and work with their fleet managers to make it up to Minnesota for this event. We appreciate them for representing Dart for such a good cause!”

It’s fun to be on the road with two dogs 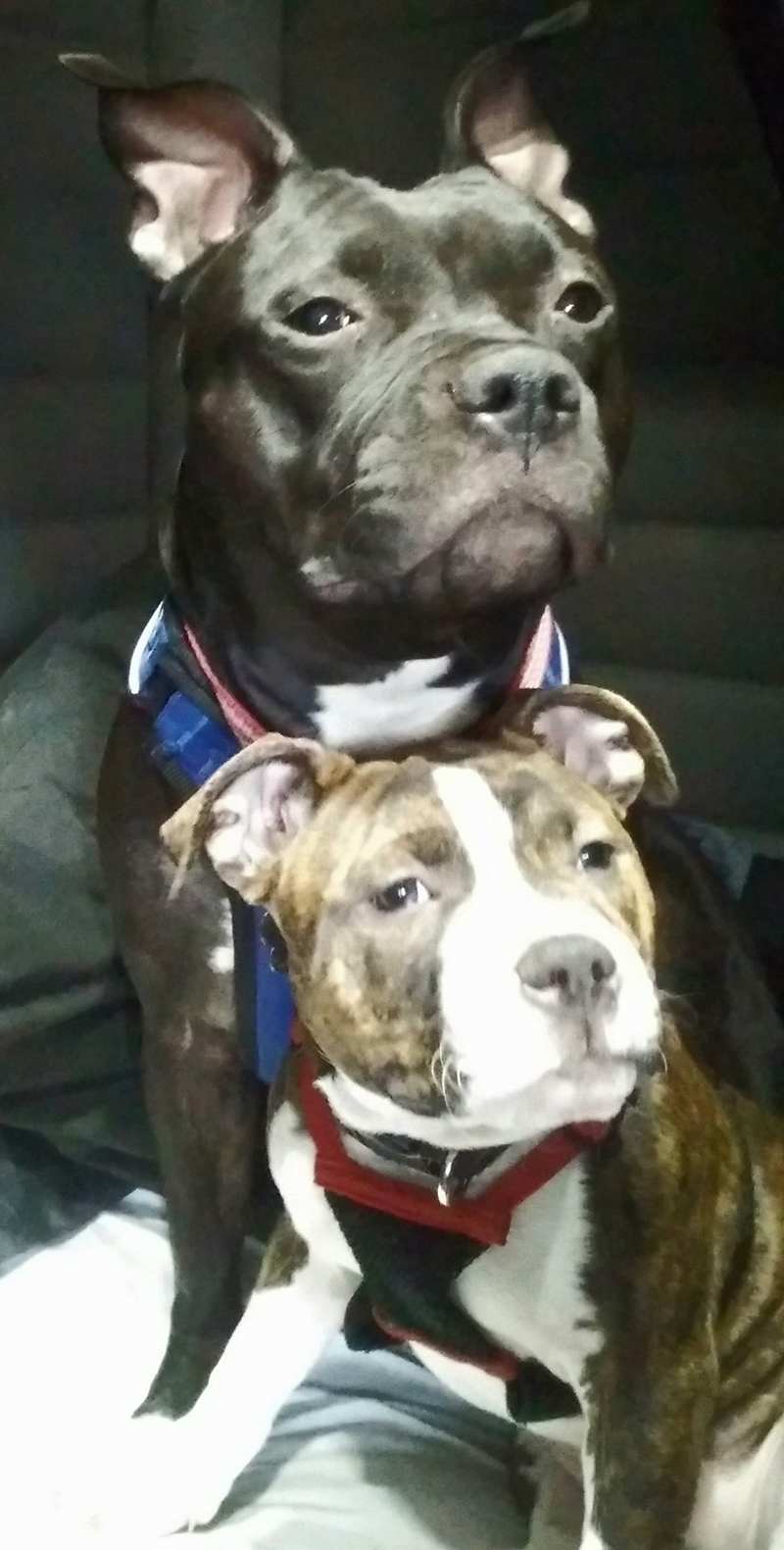 Shadow and Trixie, mother and daughter

When you’re spending many hours on the road every day with furry companions, a challenge is making sure you give them a chance to get out of the vehicle and run around. Luckily for Wendy, Love’s Travel Stops have dog parks at their facilities all across the United States with fenced-in lots where the dogs can run free and play with other dogs. There are convenient locations, so it’s fairly easy for truck drivers to schedule the route and give dogs that opportunity for play time.

Wendy’s work for Dart mostly involves hauling personal care products for a large multinational brand, and she also transports loads for one of the largest Big Box companies in the US. “I’m not a refrigerated trailer, I’m a dry van.” This limitation helps shape the types of loads with which Dart will send her.

One of the most important aspects of Wendy’s job is the ability to discern what’s safe and what’s not safe in a typical 410-mile day. If she can stay focused on being safe and smart, the rest will take care of itself. “How long a load will take depends on the weather and it depends on the construction a driver faces on the road - there can be some loads that you pick up and it takes two days to deliver versus you pick up a load and it takes you three or four days to deliver - it varies just depending on what area you run in.” 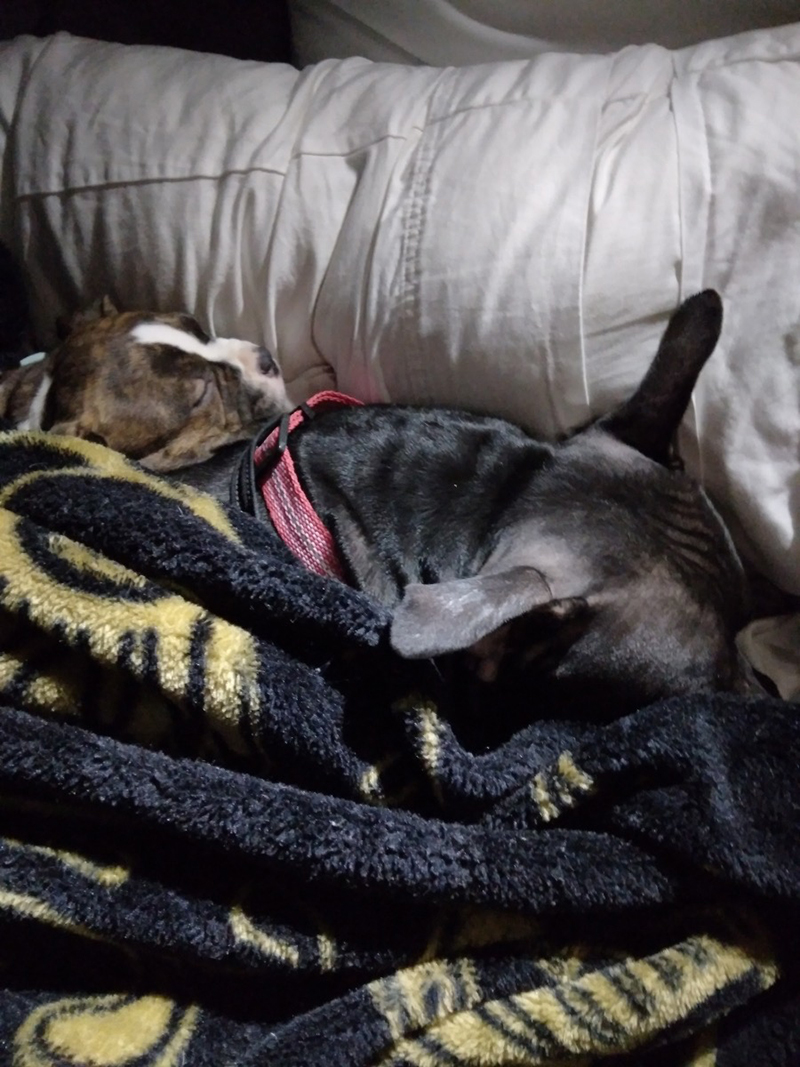 “Dart is a really good company to work for. They allow you to have pets on the road with you and they give you whatever down time you need.” Having her dogs as traveling companions, Wendy has created a home away from home. “They’re my babies. The fun, the running up trying to climb up on my shoulder or climb up on my leg when I’m driving. It gives you a sense of freedom to where you’re out on the road. You’re at peace, you’re calm. The job can be a little bit stressful. At the end of the day you go in, you take a shower, you pick back up, you feed your dogs, you walk them, and relax. And they do silly things. Playing with each other, sitting for a treat, the simple pleasures.”

Fully equipped with a refrigerator, a microwave, a George Foreman Grill, and a crock pot, Wendy cooks most meals  in her truck. At the end of a long day, she  closes her truck curtains and cooks up a big feast for herself, which often involves a nice steak. Sometimes Shadow and Trixie are lucky to be served a sliver of steak themselves. After she finishes dinner and cleans up, she likes to put a “good chick flick” in the DVD player and settle in for the night. “Not much more than that. It’s just a simple day.”

To learn more about WEX, a growing and global organization, please visit wexinc.com. 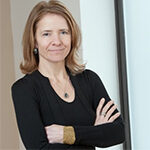 Nori is a digital content marketer for WEX and is based out of our Portland office. Nori joined WEX in 2019, bringing over 20 years of creative experience in digital marketing and content writing. Nori is focused on enhancing our thought leadership messaging and driving more meaningful engagement on WEXinc.