WEX Worldwide: What’s to Love About Life in Music City 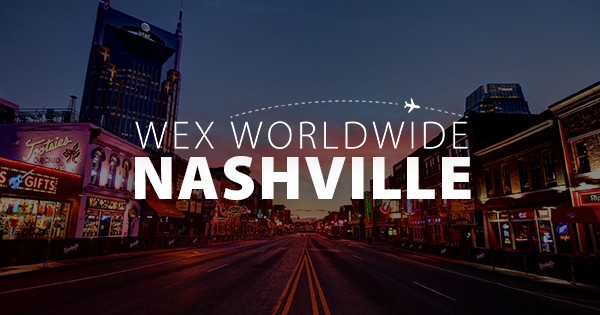 Want to know what it’s like to live and work in Nashville, Tennessee? Our new blog series, WEX Worldwide, goes straight to the source, asking our teams around the world why they love their location—and why you will, too. This week, we headed stateside to Nashville, a friendly, mid-sized “it” city that serves as the capital of Tennessee and the home of country music.

Located in close proximity to downtown, between the Midtown and Hillsboro neighborhoods, our Nashville office receives high marks for its big windows and beautiful views. In particular, employees called out the sight from the Parthenon boardroom, visible when you first step into the WEX suite. They also noted that there’s no shortage of excellent restaurant options come lunchtime. And Territory Manager Kellie Ciprian tells us, “The office is just a couple of blocks from Centennial Park; going for a walk or picnic is a great way to spend a lunch hour.”

Geographically speaking, Nashville is close to numerous other major cities, including Atlanta, Chattanooga, Memphis, Knoxville and Louisville—all of which are within a few hours’ drive. One employee called Nashville the “fuel card mecca of the U.S.”

Our teammates in Nashville admit that traffic in and around the city can be a problem, no thanks to its rapid growth—for many years, Nashville has reported adding roughly 100 new residents each day. But beyond the city’s busy urban core, Nashville is surrounded by sleepy suburbs, both new and historic, allowing Nashvillians to pick from many flavors of life in Music City.

Office Manager Ara Moorman tells us, “You can live a modern, fast-paced, big-city life or a quiet, country, rural, down-home life. This city has it all!”

Donniss Leathers, a national account manager, adds, “Nashville still has the small-town feel even though we are growing.” 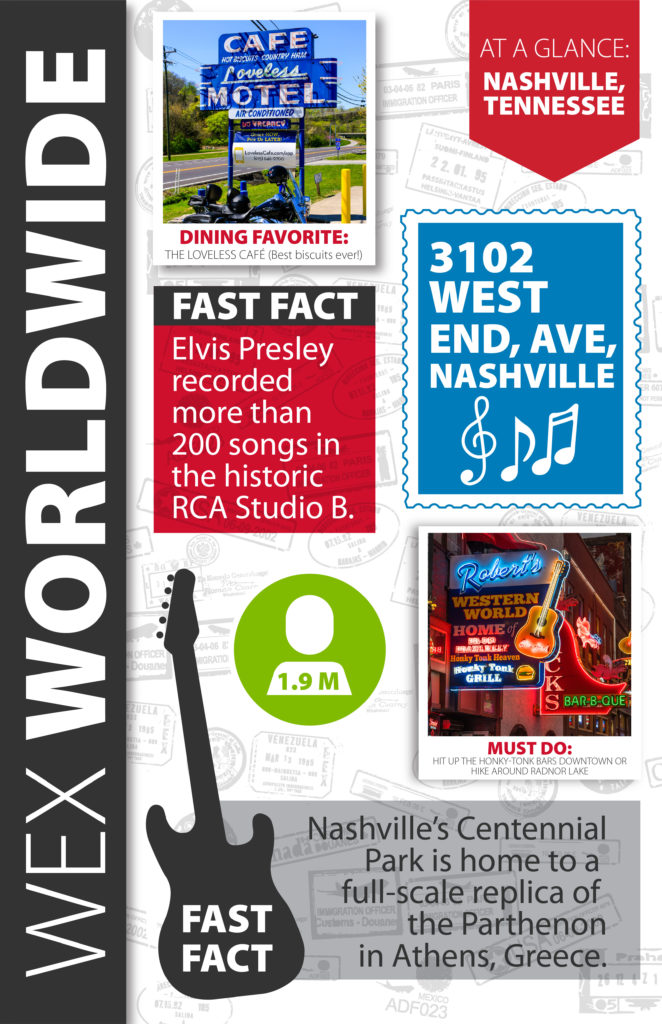 Nashvillians are quick to point out that the city doesn’t just deliver when it comes to country music. Downtown is ablaze each night with bright signs and crowds that spill out of its honky-tonks, but musicians of all genres thrive at venues across the city.

Nicki McQuiston, a national account manager, says, “On any given night, I’d venture to say there are more concerts going on in Nashville than anywhere else in the country. And if you don’t want to spend money on a concert ticket, you can walk downtown and watch live music for free.”

When we asked our Nashville colleagues about their favorite things to see, eat and do, they had more than a few suggestions to remember for the next time you find yourself in this beautiful Southern city:

Interested in finding out for yourself what our Nashville office has to offer? Take a look at open positions on our careers page, and also be sure to check out our profiles on WEX offices in Melbourne and London.