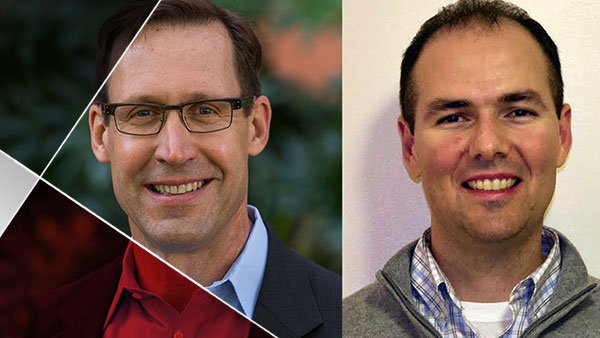 This is the second in a series of blog posts looking at some of the employees who are participating in WEX’s Global Mentor Program. Read more about our program here, and read the first post in the series here.

Had Ryan Dean not signed up for WEX’s Global Mentor Program, he likely never would have met Chris Byrd, executive vice president of WEX’s Health division. The two certainly wouldn’t have bumped into each other in the hallway, as Chris is based in Hartford, Connecticut, and Ryan works in the finance department at our Portland, Maine headquarters.

There would have been no advice given, no challenges delivered, no important contacts made.

But Ryan did sign up. And Chris signed on. And the two have found that the program has been beneficial to them both.

Chris has been “challenging me to get out of my comfort zone,” says Ryan, who has been with WEX for two and a half years as a corporate finance manager. “He’s also introduced me to people that I otherwise would not have met. It’s really helpful to have a different perspective.”

Because he mainly works on internal finance projects, Ryan doesn’t get much of a chance to interact with those outside his department. The mentorship program opened up his world.

“At previous companies, I had been more successful when I knew a little bit more about the rest of the company and how the projects I was working on affected the bigger picture,” Ryan says. “I wanted to get paired up with someone who could help me see outside the day-to-day that I have.”

Enter Chris, who has been with the company for 18 years. Despite working three states down from Ryan—which meant much of the mentorship would have to occur over Skype—Chris responded positively when approached by Human Resources with the opportunity.

“I thought, this is something that I—and anybody in my position—should be doing,” Chris says. “It’s part of leadership; it’s part of helping people inside the organization.”

During the first few mentoring sessions, Chris focused on getting to know Ryan. He knew that the more he learned about his mentee’s work history and ambitions, the more he could help. That personal attention didn’t go unnoticed.

“It was helpful that he was asking a lot of questions and trying to listen and understand what I was trying to get out of it,” Ryan says.

The two meet once a month or so, and Chris lets Ryan know when he’ll be in Portland so they can sit down together, minus the screens. And while their meetings are somewhat structured—they set goals at the end of each chat and check on the status of those goals at the next meeting—they are quick to ditch the script when something important comes up. Like the time Ryan was preparing for a big presentation. They pushed their initial agenda to the side and talked instead about how Ryan would present himself and the things he could do to be successful.

“It was really helpful to have that feedback from someone who presents every day,” Ryan says.

What is most important, Chris says, is that they are flexible and address real-time concerns and opportunities as they arise.

For those employees who are considering applying for a mentor, Ryan recommends they think about what they’d like to get out of it and then take ownership.

“This is for you,” Ryan says. “People who are successful at WEX take ownership of their career and their path forward.”

And what about potential mentors who look at the program and think, “How will I make time for one more thing?” Chris says he understands but considers mentoring an important element of being a good leader.