Is Train Travel About To Have A Renaissance? 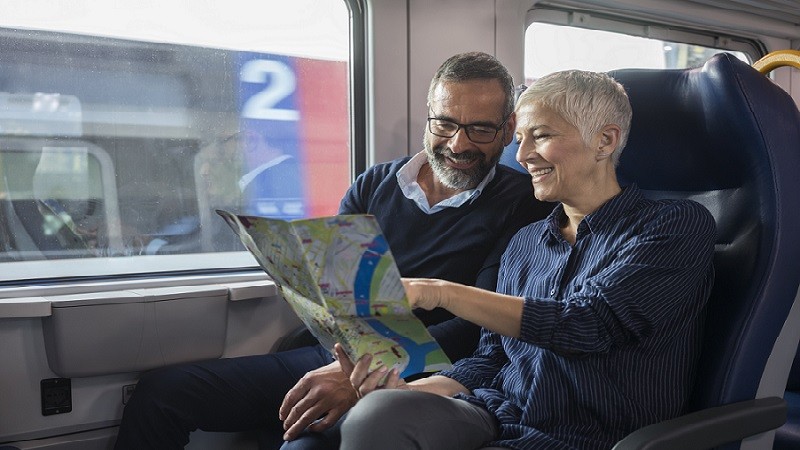 For many, modern day train travel may not conjure up images of elegance and luxury. The daily rail commute to the city probably doesn’t compare with the golden age of train travel… but that might be changing. Both rail lines and travel companies alike are starting to realize that there are opportunities to be had on the rails. The trends toward experiential travel, slow travel, and luxury all point toward a growth in leisure train travel.

In today’s fast-paced world, many travelers are looking to slow down. The “slow travel” movement and the trend toward experiential travel show that travelers are not all interested in cramming as much into a trip as possible. A recent Booking.com survey of travel trends reported that 25% of travelers were planning trips based on the journey rather than the destination, such as an “epic road or rail journey” this year. Generational differences play a role, and it’s actually the youngest generation (Generation Z) that is most enthusiastic about train travel. Expedia’s Multi-generational travel trends report for Europe showed Gen Z is the likeliest generation to travel by train with 13% saying they traveled by rail for their latest trip, compared with 9% of Millennials and 8% of Boomers.

The luxury market is another key opportunity for rail travel. The luxury segment is the fastest growing segment in the travel industry, and is making a shift toward more authentic and unique experiences. Travel companies are paying attention and leveraging the mystique of train travel’s golden era to recreate an elegant and luxurious rail experience.

Many companies are tapping into the power of nostalgia to sell rail travel. Great Western Railway, in an effort to attract more leisure travelers, launched an ad campaign based on the 1940s children’s adventure novels, The Famous Five. Amanda Burns, head of sales and marketing explained their focus on nostalgia, saying to Skift “We had to stop thinking of GWR as getting from A to B and instead give them something much more powerful, which was that feeling.”

Belmond’s Venice-Simplon-Orient-Express evokes nostalgia through the train’s name (and associated literary murder), and by recreating the luxury of the original line. The Presidential Train in Portugal also taps into an elegant history. The 1890 train, which was the royal train for King Dom Luis I, was recently restored and now provides a full luxury and cultural experience to tourists, with wine tours and fine dining included. The El Transcantabrico Gran Lujo in Spain and Belmond’s routes in Ireland, Scotland, and England are other examples of train journeys that cater to the luxury market.

Travel Companies Are Getting On Board

Travel companies are getting in on the action by providing the expertise and connections that rail operators need to sell their experiences. The Rocky Mountaineer in Canada, which sells 80% of its trips through agents, recently launched a popular program for travel agents to educate them on their product and dispel common myths. The successful partnership between the company and travel agents has been vital to their growth.

Travel companies are also finding success by putting together their own packages. Great Rail Journeys offers packages throughout Europe on some of the best known and most scenic lines, such as the West Highland Line in Scotland and the Glacier Express in Switzerland. Tours utilize many of the continent’s high speed rail routes, such as the Eurostar, TGV and InterCity, and include hotel stays and some meals as part of the package. Vacations by Rail operates in a similar fashion, with both escorted and independent rail tours. InnTravel, which focuses on slow travel, provides affordable, custom experiences throughout Europe that use public rail lines.

On the other side of the equation, rail operators are doing their part to make rail travel a better experience. Recognizing that old trains and outdated technology are hindering their business, they are making strides in modernizing their routes, trains, and systems. Across Europe, huge investments are being made on upgrades. One notable example is the Caledonian Sleeper, which runs overnight services from London to Scotland. The company invested over €100 million to bring in new carriages that will be more comfortable to modern travelers and more appealing to tourists, such as double beds, en-suite rooms, as well as amenities such as “Highland-sourced menus” that appeal to those searching out cultural experiences.

In an effort to make rail travel easier to find and book, a number of major rail operators are also in the process of replacing their sales, distribution, ticketing and revenue management systems. Skift recently reported that rail tech company SilverRail (owned by Expedia) is integrating with two of the world’s five-largest travel management companies to enable corporate clients to more easily book rail tickets. Dutch rail tech vendor Sqills, which worked with IrishRail last year, has begun to implement its sales and distribution suite with rail operator Eurostar. A number of other European rail operators are exploring options as well. And Virgin Trains recently launched an industry first: They can now sell tickets through voice command with Amazon Alexa.

Travelers are finding that rail travel offers a number of benefits over other options. The comfort of being able to move around on a journey, amenities such as onboard Wi-Fi, and, the ability to take in the landscapes flying by appeal to many travelers. With upgraded trains and technology, and well thought out experiences, rail operators and travel companies are hoping their efforts pay off and usher in a new golden age of rail travel.